Bridgestone Blizzak WS90 and Nokian Hakapeliitta R3 are both winter tires. WS90 shows heavy-duty performance in snow-packed areas and also gives standard comfort while driving on a dry road. R3 on other hand has a wonderful capacity to maintain a grip on slippery surfaces like a frozen road and wet pavement. 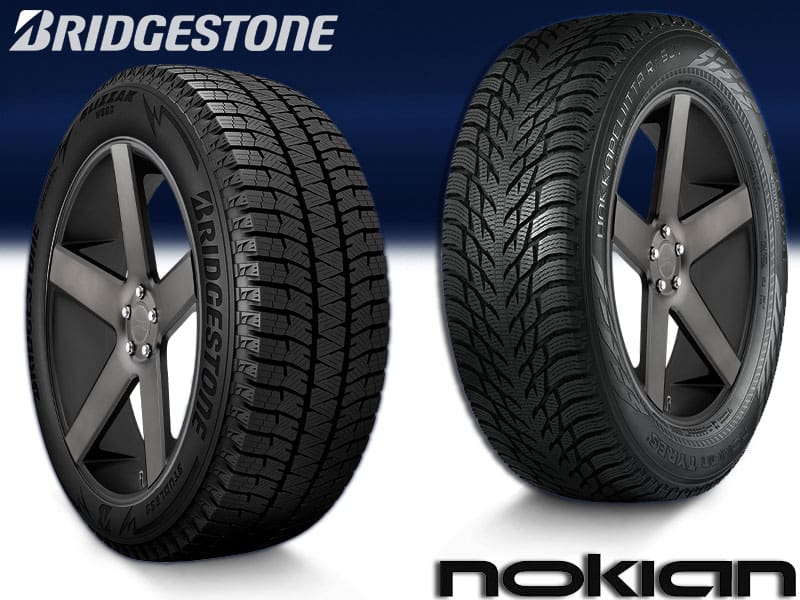 The Tread rubber of both tires is constructed using specialized patent winter tire compounds to ensure optimized traction on both ice and snow. Detailed analysis of their tread design and pricing is shared below;

Tread of Blizzak WS90 has a symmetrical pattern in which the central rib has a crisscross design that runs circumferentially without any lateral spacing in it. Two linear grooves are present along its sides and two disconnected grooves are formed by notching of shoulder lugs. It also has multidirectional, zigzag sipes over all of its blocks. The presence of only a few narrow voids accounts for its relatively larger contact patch which eventually results in better dry traction. On the other side, a low void ratio proves to be a downside on a wet road as hydroplaning resistivity is reduced. However, its channels are comparatively deeper and provide a better ability to evacuate snow in a backward direction while rolling over a snow-covered pathway. The tire struggles on ice due to the absence of decent siping.

R3 characterizes an aggressive tread that has four circumferential grooves, two of which are disjointed and create a clawed design of tread ribs, multidirectional deep sipes of various widths are marked over its lugs and multi-faceted snow claws are embossed in its voids. High void ratio reduces contact patch, as a result its tread grips over the dry surface is relatively loose. On the other side, wider grooves and deeper sipes favor traction on wet surfaces, as water is efficiently wiped from its treads. Its performance in snow is good as its voids evacuate snow reliably, moreover, engraved snow claws provide biting ability on soft snow yet lesser tread depth makes it stand behind in comparison. Its ice traction is superior thanks to its deeper sipes, providing good traction.

Comparatively, Blizzak offers a better grip on the dry surface as it has a relatively large contact patch due to less narrow grooves as well as wide and continuous central rib, resulting in a strong grip of its tread on a dry road.  Although its zigzag sipes and deep voids offer dependable hydroplaning resistivity over wet pavement, however, relatively fewer grooves make it stand behind in the competition. While rolling on the snow-covered roads, WS90 takes the lead as the depth of its channels is higher than the competitor’s, as a result, they can evacuate snow and slush more efficiently. Moreover, bite particles present in the tread compound make the tire’s snow traction at its best. The tire lacks ice griping due to the absence of decent siping.

Owing to its distinct tread design, Nokian R3 possess enough contact patch to give a satisfactory performance on a dry road, nonetheless, its dry grip is lower than the competitor due to its relatively high void ratio. A higher number of wider grooves and the presence of multidirectional sipes of varied widths make this tire wonderful over slippery surfaces like wet roads as water is wiped off proficiently through these voids. When R3 is used in snow-packed areas, Cryo crystal 3 particles in tread rubber, many grooves and snow claws among them provide biting edges and evacuation, leading to reliable traction yet its performance is lesser than its competitor as its voids are less deeper, making its evacuation and biting capacity relatively lower. On the ice, it excels due to the higher number of sipes.

WS90 provides fully commanded handling as the vehicle steers along a corner on a dry road because its shoulder lugs are comparatively larger and also possess traction notches to provide additional biting capacity. However, it stands behind the competitor in terms of steer management over wet surfaces as its shoulders offer relatively lesser aquaplaning efficiency due to its higher contact patch and smaller sipes in comparison. On the snowy road, it is the game-winner again because its lateral grooves are deeper so they can evacuate snow more efficiently and maintain firm traction while turning. Furthermore, its tread compound contains bite particles for superior snow traction.  The efficient siping of the tire enhances its ice handling.

Shoulders of R3 are comparatively smaller and lack traction notches, these qualities make its steer handling on dry road reduced in comparison, as tread holds on the ground less firmly when less of its surface area is in contact with the road. On the other side, it offers controlled handling on a wet road as its shoulder grooves and wide sipes wipe the water away and the tread can maintain stable traction while taking turns. On a snow-covered path, R3 presents optimized handling but minimized tread depth makes it less efficient than the competitor.  On the ice, it performs poorly since its shoulders lack enough siping to efficiently steer on ice.

Both tires can resist aquaplaning due to their unique tread features, nevertheless, WS90 scores lesser in this respect owing to its low void ratio. Zigzag sipes over lugs along with linear and disjointed grooves among them pass water easily and reduce the chances of slipping off on the wet roads.

R3 offers superior resistance against hydroplaning as it has got a higher number of voids over its tread which wipe away water from the surface. Multidirectional sipes of various widths are marked all over the tread also contribute significantly to the passing of water.

WS90 encounters more rolling resistance than its competitor as more surface area of its tread has direct contact with the road, leading to increased friction while rolling. Therefore, an enormous amount of energy is required to overcome this friction as a result large quantity of fuel is consumed.

R3 has a high void ratio and minimal contact patch, that’s why it faces less friction against its movement on the road and displays comparatively lower values of rolling resistance. As less energy is required to overcome the hysteresis produced, it shows a relatively improved fuel average.

Winter tires are usually noisier than summer tires due to their aggressive tread patterns, so are both of these. Comparatively speaking, WS90 makes less noise because it has fewer grooves which offer lesser space for reflection and resonation of sound waves. It is more comfortable on the dry road due to its higher contact patch and low void ratio while the same features are reasoned for decreased comfort on wet paths.

R3 produces more noise than the competitor due to the high void ratio. Increased number of wide channels offer more space for the movement and collisions of air particles which result in loud noise when the tire rolls along. It is relatively uncomfortable on dry pavement due to lesser contact patch while better aquaplaning resistivity makes it more comfortable on a wet road.

WS90 is a less durable option in comparison due to the design and composition of its tread. It faces more rolling resistance due to a larger contact patch, moreover, its tread wears more quickly after the consumption of its upper layer. Its tread is built using a dual compound structure in which upper 55% is NanoPro tech multicell compound containing silica enhancements, microscopic bite particles, and hydrophilic coating to ensure exceptional ice and snow traction while lower 45% is Bridgestone’s winter tire compound that is relatively softer rubber.

R3 last for a relatively longer duration as they face lesser resistance while rolling, resultantly its tread is consumed slowly against the road friction. Biobased Cryo crystal 3 grip particles have been added into its tread rubber to strengthen it and make its ice grip more stable.

Hakkapeliitta is expensive than its competitor due to its has the economic benefit of better fuel average and relatively slower wear. On the other side, Bilzzak provides awesome snow traction on a lower price range.