Both these Goodyear tires are meant for all-season use. That is why their rubber polymer and tread pattern both are optimized to give a reliable performance on dry and wet pavement as well as on ice and snow. Plus, these tires are among highly durable all-season options in the market as they carry long tread life warranties. 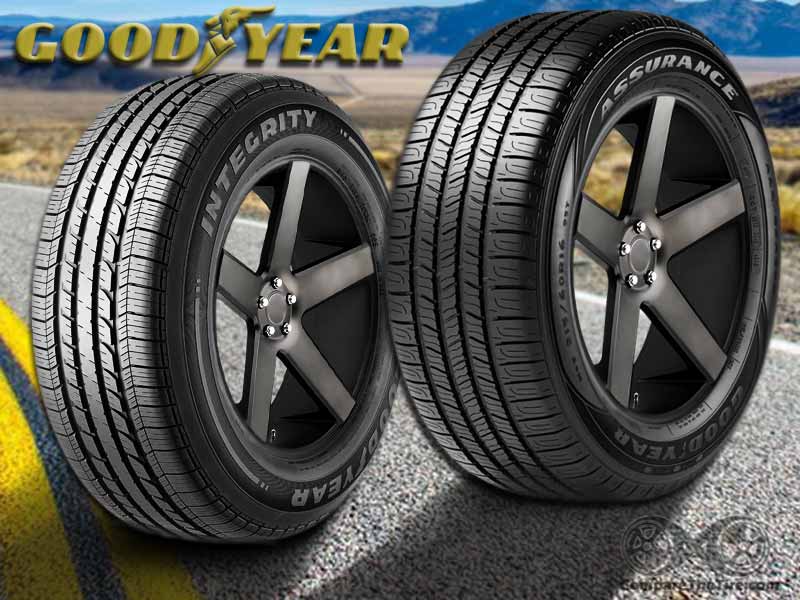 Goodyear Integrity presents a blend of traction features that make it perform effectively in various conditions. Especially its deeper tread gives it an edge over the competitor by providing enhanced resistance to hydroplaning. It also shows good traction on the dry road due to its solid centerline rib.

Goodyear Integrity specifies an open tread with three ribs and four uninterrupted grooves. Its central rib runs continuously along its circumference while small blocks form the other two ribs. This continuous rib makes its contact patch larger than the competitor. Small cut-like sipes are present on all ribs and tread blocks. Shoulder blocks are spaced by narrow horizontal grooves and their upper side is marked with linear sipes in both horizontal and longitudinal directions. Nevertheless, its tread depth is larger in comparison.

Assurance also characterizes three ribs and four grooves in the middle portion but none of its ribs is continuous. Instead, its rows have small blocks with lateral spaces between them. These blocks are marked by curved or wave-like sipes that are relatively prominent and wider than the competitor’s sipes. Its shoulder blocks are comparatively wide and also have lateral spaces between them. However, both its lateral and longitudinal grooves are shallow as compared to the opponent.

Goodyear Integrity shows a superior grip on the dry tarmac due to the enhanced contact patch. Its middle rib runs uninterrupted along the circumference, making the rubber-to-road contact of its patch higher than its competitor. This ultimately leads to a relatively improved dry grip. Similarly, its wet and ice grip is better in comparison because it has a higher contact patch and deeper grooves. Ho, it presents a lesser grip on snowy pathways grip than the contestant. Although its deeper tread specifies an enhanced evacuation ability yet the biting efficiency on soft snow is minimized by the lack of lateral grooves in the central rib.

On the other side, Assurance ranks at a lower position for dry grip due to decreased contact patch. Numerous horizontal voids in its central rib reduce the surface area available to maintain a grip on the dry road. On wet or icy pavement, prominent sipes and frequent lateral spacing help it to offer a reliable grip. Yet, it performs comparatively lesser as it has a minimal contact patch to grip on the rigid surface. However, it takes the lead on snowy tracks because small blocks and lateral grooves of the central rib give it an enhanced ability to bite over the soft snow.

Integrity presents less responsive dry handling than its competitor. The presence of wide and narrow lateral grooves reduces the ability of its shoulders to hold on to the road while taking turns. Resultantly, the steering response becomes less precise. However, these channels become an advantage when you are driving on a wet or icy pathway. In this case, its deeper grooves and extensive shoulder siping wipe off the water more efficiently and allow the shoulders to maintain steering traction. On snow-covered paths, its deep grooves result in higher biting ability as well as better snow evacuation. Both of these features are necessary for stable cornering on snow; thus, it again takes the lead over the competitor.

Conversely, Goodyear Assurance shows enhanced steer response on the dry road as its shoulder lugs are bulky. Its shoulders clutch the surface firmly and provide complete cornering stability on dry tracks. For wet paths and ice, lower tread depth makes it stand below the competition as its shoulders cope with standing water less conveniently, and steering stability is reduced. On soft snow, it gives a good competition to the contestant as its wide grooves and prominent sipes offer a good biting ability. However, the lesser depth of tread channels reduces the ability to remove snow from the tread, resulting in a lesser handling efficiency than the competitor.

Integrity has a higher ability to safeguard against hydroplaning resistance. The credit for this capability goes to its deeper tread which provides a larger water holding capacity. Thus, it can channel out a comparatively larger volume of water. Tiny linear sipes also help the grooves in the wiping action.

On the other side, Assurance also ensures a reliable resistance against skidding on wet pavement. It offers an optimized wiping ability because it has more lateral grooves in the central portion and more prominent sipes. However, comparatively speaking, its proficiency to resist aquaplaning is lesser than its competitor as the lesser depth of its tread that specifies a relatively water-channeling capacity.

A higher rolling resistance comes across Integrity because its contact patch is bigger. When a larger surface area of tread is rolled on the surface, a larger force is required to overcome the rolling friction and more hysteresis is produced. Resultantly, the vehicle consumes more fuel when these tires are mounted on it as compared to the contestant.

On the other side, Assurance faces comparatively lesser rolling friction, and the credit goes to its lower contact patch. When the contact of tread rubber with the road is minimized, its energy requirement for rolling is also reduced. Hence, this tire stands more fuel-efficient than the contestant.

Comparison of Comfort and Noise

Integrity provides more ride comfort but is relatively a noisier tire. Higher driving comfort is credited to its better traction qualities associated with a broad contact patch and deeper tread. However, the same deep voids which make its hydroplaning resistance superior are responsible for its loud tire noise. Air particles find enough room to circulate in these open channels, thus, their revolution and collisions generate much noise.

Conversely, Assurance offers lesser driving comfort but its rolling sound is relatively minor. A combination of a lower contact patch and lower tread depth renders it less traction capability and makes it stand below the competitor for ride comfort. Nevertheless, the shallowness of grooves decreases the space available for sound resonation, ultimately leading to decreased noise production.

Integrity gets a lower score than its competitor due to its higher contact patch. When a tire with a larger contact patch rolls on the paved surface, more friction arises, and ultimately tread rubber get damaged sooner. The same thing happens with this tire, making its tread life shorter in comparison. Its lower UTQG number also signals about its faster tread wear. Also, its treadwear mileage warranty is lesser than its competitor.

In contrast, Assurance tires will last for a longer duration because their tread pattern is openly designed and rubber-to-road contact is lesser than the competitor. Resultantly, the tread rubber faces lesser damage due to road friction. So, you can have more miles on it than its competitor as a longer tread life is guaranteed from the manufacturer.

Both these Goodyear tires are built for all-season purposes. Due to comparable features, both tires are available in the same price range.