Both these tires are max-performance summer tires that offer effective on-road grip and handling. To find out which tire performs better than the other, we conducted a test on the size 235/45R18 of both the tires. 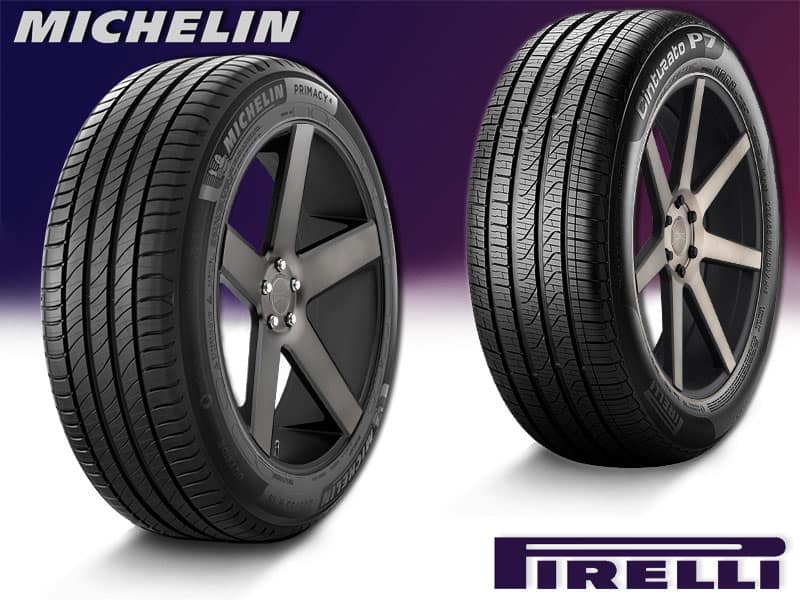 As per our report, the Primacy 4 showed a better grip on dry roads due to its higher contact patch. In comparison, the hydroplaning resistance of the P7 is superior because of its wider grooves resulting in a higher void ratio. A detailed comparison of both these tires is provided in the article below.

Featuring an asymmetrical tread design, the Cinturato P7 consists of two outer shoulders and three central ribs. The shoulders of these tires are wide, and the shoulder lugs are also larger as compared to its competitor. There are four longitudinal and deep grooves running around the tread that separate the ribs and the shoulders from each other. The sipes on the central part are numerous and deep. However, the sipes found on the shoulder blocks are not that impressive. As a result, the wet handling of this tire is compromised.

The Primacy 4 also features an asymmetric tread design to favor high temperatures. There are three central ribs sandwiched between the two other shoulders. The shoulders are compact, and the shoulder blocks are closely placed. Moreover, the sipes on the shoulders are also numerous and deep. But the same cannot be said for the sipes on the central part of the tire. However, this is compensated by the narrow longitudinal grooves running around the tread that provide better traction.

P7 has wide circumferential grooves as compared to its competitor. In addition to this, there are spacings in the central blocks as well. So, due to the relative abundance of voids, the contact patch of this tire is reduced.  As a result, its braking distance of 123 feet on dry surfaces is relatively more than its competitor. However, these tires are the clear winner in terms of wet grip. That’s because the multi-directional zigzag sipes wipe away the water efficiently from the surface and as a result, the risk of the slipping of the vehicle is minimized. This is what leads to a firm grip on wet roads. Therefore, their braking distance on wet surfaces was recorded at 193 feet.

On the other hand, the Primacy 4 features a higher contact patch due to the lower number of longitudinal grooves on its tread. Moreover, the central rib of the tires does not possess any lateral voids as well. As a result, more surface area of the tread comes in contact with the ground and the tire will be able to grip the surface more strongly. This is what leads to better traction and a shorter dry braking distance. As per our test, the dry braking distance of these tires was estimated at 120 feet. However, the same performance is not translated into its wet grip. The sipes found on the tread are not only lesser in number but are also shallower than its competitor. Therefore, the stopping distance of these tires was recorded at 199 feet in wet conditions.

The shoulders play a major role in determining the handling stability of a tire. Here, the P7 offers lesser stability to the drivers while taking tricky turns over dry roads. That’s because it has narrower shoulders and the shoulder lugs are also small in comparison. As a result, the biting edge of the tire decreases, and the drivers find it difficult to maintain their grip on dry tracks. So, the time required by the vehicle to complete a lap will increase. Therefore, the dry handling lap time of these tires was recorded at 60 seconds. The same is the case with the wet handling of these tires. Even though the central part possesses numerous effective sipes, the shoulder blocks lack decent siping. Thus, the vehicle will require more time to finish a lap on wet tracks as well and the wet handling time was estimated at 96.6 seconds.

In comparison, when a vehicle with the Primacy 4 tires takes a turn on a dry track, its shoulders grip the road extremely efficiently and as a result, the drivers get well-commanded steer management. Its shoulders are compact and the shoulder lugs are closely positioned to each other. This is what results in stable traction while taking turns over dry roads. Due to this, the dry handling time of these tires is reduced and the time was recorded at 59.7 seconds. The wet handling time of these tires is also incredible. That’s because numerous sipes are present on the shoulder blocks which reduces the time required to complete a lap. Therefore, the vehicle was able to finish a lap in just 94.2 seconds.

The P7 displays excellent hydroplaning resistance due to its deeper grooves. The higher void ratio of these tires results in enough space for the passing of water through its tread. This will provide stability to the vehicle on flooded roads and the chances of accidents will reduce.

Conversely, the hydroplaning resistance of the Primacy 4 is lower than the P7 because of its narrower grooves. Due to the narrower grooves, there is less space for the passing of water from its tread. As a result, the vehicle will lose its traction and start floating on flooded roads.

In comparison, the Primacy 4 loses to its competitor because of its higher contact patch. As a result, more area of the tread will come in contact with the road and the tire will require more energy to roll on the surface. This will also lead to reduced fuel efficiency and the drivers will also get less mileage from these tires.

When we talk about comfort, the summer tires are always more comfortable than the winter and A/T tires. So, when we compared both the tires for their comfort, we found that the P7 is less comfortable than the Primacy 4. That’s because these tires feature wider grooves. As a result, there is more space for the entrapment of air particles inside its voids. When more air particles will be trapped inside, they will strike against the walls of the grooves and produce a lot of noise while driving at high speed. This is what makes them a less comfortable option to drive on roads.

On the other hand, the lower void ratio of the Primacy 4 makes it a more comfortable option to drive on roads. That’s because there is less space for the entrapment of air particles inside its grooves. As a result, this tire will produce less noise. So, if you are in search of a comfortable tire to drive at high speed, we will hand down recommend this tire.

P7 is constructed using a special silica-infused wet compound which makes it a more durable option than its counterpart. The internal construction is also done using the twin high-strength steel belts and single-ply polyester. Thus, the chances of cuts and punctures are reduced.

On the other hand, the tread of the Primacy 4 will wear out faster because these tires have a higher rolling resistance. Their tread is also manufactured using twin steel belts and single-ply polyester. However, they are not as durable as their counterpart.

The price of the Primacy 4 is a bit higher as compared to the P7 because of its excellent handling, incredible dry grip, and comfort. On the other hand, the P7 is with its efficient hydroplaning and rolling resistance, higher durability, and wet grip is a more affordable option to consider.