Both are highly impressive summer tires because of their tough tread compound. As a result, they can maintain dry and wet traction even at high temperatures and provide an enhanced driving experience. 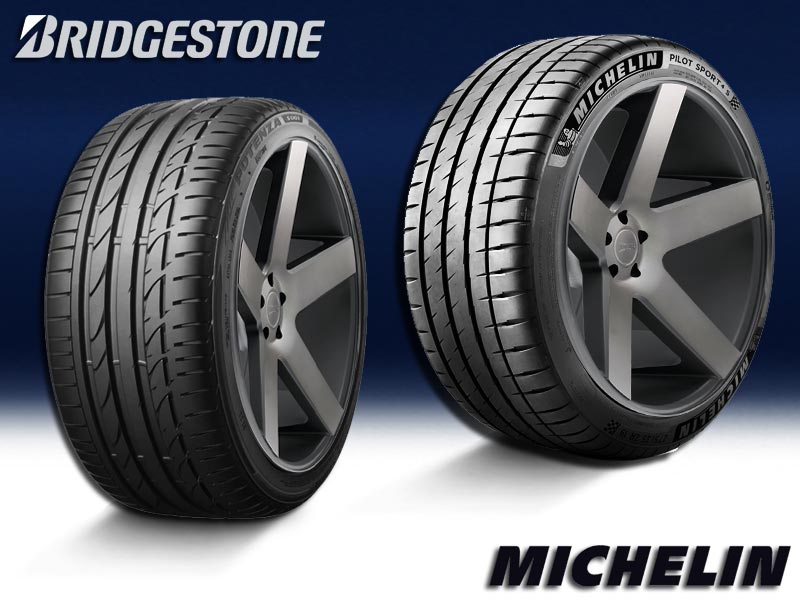 The test was conducted upon the 245/45R18 size of both the tires which showed that the Potenza S001 has a better grip on wet roads due to its numerous sipes. However, Pilot Sport 4 offers excellent dry grip due to its higher contact patch.

In this article, we will discuss all the main differences between the two tires which will help you decide the better option for your vehicle. So, let’s get started!

Michelin Pilot Sport 4 features three ribs sandwiched between the two bulky shoulders. Four narrow grooves are running around the tread and all of them are of different widths.

Its shoulders are broader as compared to Potenza S001 and the shoulder blocks are not closely placed either.

In addition to this, the sipes present on the tire are also lesser in number. However, this is compensated by the deep grooves found on the shoulder blocks which make a major difference in performance.

Bridgestone Potenza S001 is a typical summer tire with one rib and two block columns in its central part, curvy sipes, four grooves, and compact shoulders.

The grooves of this tire are wider in comparison and the sipes are also more in number. Lateral grooves are also running through the tread.

Other than that, the shoulders are incredibly compact too.

A tire’s grip on the road is determined by the contact patch between the road’s surface and its tread. Here, Pilot Sport 4 is the king of dry grip.

That’s because it features a higher contact patch and therefore, with a dry braking distance of 105.3 feet, its performance on dry surfaces is better.

When it comes to the wet grip of the tires, the sipes also play a prominent role in addition to the contact patch.

While testing this tire for wet grip, it stopped at 97.7 feet. Although this performance is not entirely poor, it is still less effective when compared to Potenza S001.

On the other hand, the dry grip of Potenza is estimated at 110 feet which is slightly higher as compared to its rival. The main reason behind the higher braking distance of this tire is lower contact patch.

Since less area of tread comes in contact with the road, its grip on dry roads is compromised. Apart from this, the numerous sipes help this tire to outperform its opponent in wet grip.

These tires have a wet braking distance of 94 feet, which is shorter than Pilot Sport 4.

When we tested the tires for their handling capabilities, both of them displayed effective steering responses to manage the vehicle on dry roads.

However, Pilot Sport 4 slightly lagged behind because of its open shoulders which increase the void ratio.

However, when it comes to wet handling, it was able to outperform its opponent. That’s because the grooves present on the shoulders are pretty deep, which makes the steering response on wet surfaces excellent.

In comparison, Potenza S001 features compact shoulders which result in fully controlled dry handling along with more lateral stability. For this reason, its lap time on dry surfaces is estimated to be lesser than its competitor.

However, the same performance is not translated into wet handling. Even though these tires contain more sipes than Pilot Sport 4, the sipes on the shoulders are not deep in comparison. As a result, its lap time on wet surfaces was estimated a bit higher.

Michelin Pilot has narrower grooves in comparison. As a result, the hydroplaning resistance of these tires is reduced as there is lesser space for the effective removal of water.

Not only this, but they also protect the vehicle from skidding on a flooded road.

Due to the higher contact patch of Michelin, the tire will face more friction while moving on any surface. That’s because more area of its tread will be in contact with the road.

Since the rolling resistance will be higher, more fuel will be required to make up for the loss of energy.

However, owing to the relatively high void ratio, Bridgestone Potenza will face less friction while rolling over the road because less area of tread is in contact with the road’s surface.

As less energy is lost while moving, less amount of fuel will be consumed as well.

When it comes to noise and comfort, Michelin produces less noise on road owing to its narrower grooves which offer less space for the air particles to strike back and forth. This leads to minimum tire sound even when the vehicle is rolling at a high speed.

On the other hand, Bridgestone Potenza is a noisier tire due to its wider grooves. The grooves offer more free space for resonation and reflection of sound waves within them. This leads to the production of noise and as a result, the overall comfort of the tire is reduced.

Michelin Pilot faces higher rolling resistance which will cause the tread to wear out faster. However, its tread composition is incredibly sturdy. This is what makes it one of the most durable summer tires out there. What’s more, it is backed by the mileage warranty for its tread as well.

In comparison, S001 is also a sufficiently durable tire because of its strong internal construction. The tread of these tires is manufactured using a one-ply polyester casing. The manufacturing is further boosted by the Aramid-Nylon cap ply. Moreover, due to the lower rolling resistance, the tread will deteriorate slower as well. As a result, drivers will get better mileage from them.

Potenza S001 is a more budget-friendly tire among the two as it does not only costs less but also offers excellent wet grip and dry handling capabilities. However, if budget is not your concern then Pilot Sport 4 with its dry grip and wet handling performance is also worth considering.