When it comes to off roads tires, Kenda may not come on the list of famous brands, but they surely made a great tire. 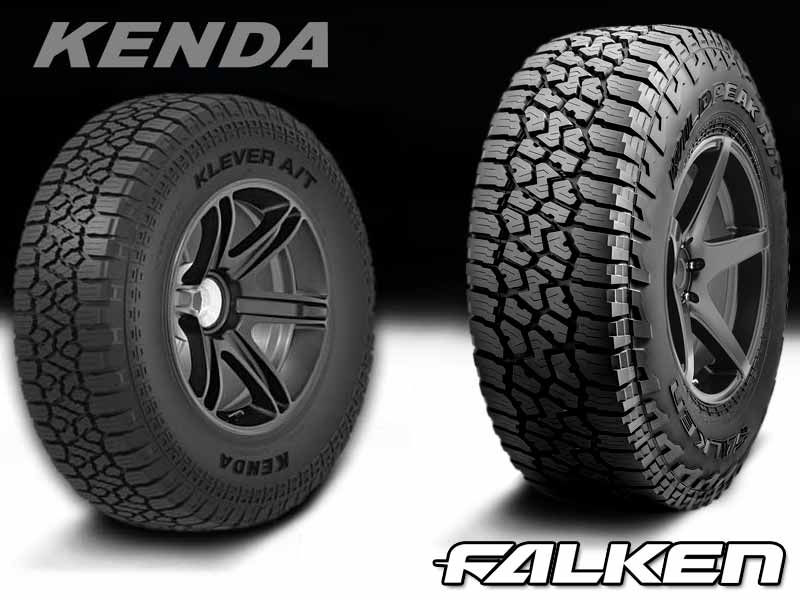 Kenda Klever AT2 is an All Terrain tire, and it provides you with a good off road performance without compromising on road comfort. But the best thing about this tire is it’s low price tag, (even lower than Falken here).

The Wildpeak AT3w on the other hand, is also All Terrain which is great at wear, wet and winter performance, hence the 3Ws in the tires name.

But would Kenda AT/2 be able to outperform this tire? Well let’s find out.

If we look at the Kenda AT/2 first, the tire features a very complicated design.

It features 3 unique block shapes which make mirror image of each other.

The central blocks, which is highlighted with green, are surrounded by others. These include the 2 arrow shaped blocks on one side and 2 yellow colored blocks on the other.

All these blocks have off-set edges and are seen with similar siping (straight lines that you see).

The tire’s haphazard placement of blocks is actually made to bite off road, and at the same time the various angles in these blocks dampens the noise levels (variable pitch technology).

Also, you can see proper circumferential grooves which separates the shoulder blocks of the tire, (but you can’t see any proper lateral channels in there).

This is also common with the Falken Wildpeak.

With these biting edges facing in all directions, the Wildpeak is able to grip from all sides.

With these edges, every other shoulder block is also seen with notches which looks similar to “C” shaped blocks.

But it’s blocks are not serrated like the Kenda AT2.

The Kenda AT2 features staggered shoulder blocks where its one block has a scoop as show below (while other simply forms an edge).

These blocks are also almost same in length/width and they don’t vary like in Falken Wildpeak. But here similar 3D wave like pattern in seen on its sipes.

On the sidewalls, the tire barely makes any lugs. And a little they make are very blocky.

Where on Falken Wildpeak, although, the tire is not staggered, it still makes a more aggressive pattern, with multiple saw toothed edges.

Both its shoulder blocks join together on the sidewalls making a more aggressive and bulkier pattern compared to Kenda AT/2.

If we look at other features of these tires…

Falken Wildpeak actually offers deepest tread in the category, and it also has more sizes available with load rating up to F where Kenda has up to E.

On Road Traction and Comfort of these tires:

With a more uniform central blocks arrangement, the Wildpeak is able to perform better on dry roads.

And although, the difference is only marginal, the Wildpeak makes slightly firmer contact with pavements.

But on corners, the steering response of this tire was a bit stiffer, where on Kenda Klever AT2, the cornering was very smooth and slightly more stable.

The 3D wave like siping on it’s shoulder blocks are very effective, and since tire’s shoulder come in to action while cornering, this tire shows remarkable wet roads handling times and lateral g forces.

In terms of comfort, both tires are almost equal here.

The Wildpeak with its slightly softer silica compound cushions bumps in a better way.

And the Kenda Klever AT2 on the other hand is quieter of the two, with vigorous angles and cuts of its randomly placed blocks, enhancing overall ride quality.

Both of these tires are branded with 3 peak mountain snowflake rating. So this tells us that, they both would provide you with great acceleration on snowy terrains, which is what this rating is all about.

But still don’t expect them to perform as well as dedicated winter tires.

Winter tires don’t stiffen up with colder temperatures, where A/T tires start to loose traction after reaching 20 °F (or -6 °C).

But since the Falken Wildpeak provides you with a slightly softer compound, it would stiffen up less in comparison.

So although, both tires here provide you with dual siping pattern and multiple biting edges, the Falken Wildpeak would still perform better.

And since they have more tread depth as well, they are also able to deal with slightly deeper snow too.

Rocky terrain can get tricky as it requires a lot of grip combined with tire’s durability.

And when it comes to durability, both of these tires seem equally tough with a same inner construction of 2 ply polyester, 2 steel belts and 2 ply nylon.

So both tires provide equal safety to the most vulnerable part of the tire? (Sidewalls?)

Well Wildpeak, has 2 extra layers of poly-amide, running around its bead, so this tire in a way, actually makes 4 layer sidewall construction, making it more puncture resistance (from any sharp rocks) in comparison.

Other than this, the tire also forms bulkier lugs, which during sidewall flexing are better able to pull and grab in comparison.

Sidewall flexing is also dependent on the stiffness of the tire and as Kenda AT2 has a slightly harder compound, it won’t be able to perform as better when pressured down, comparatively.

But Klever AT2 is still not too far off, as the tire still provides with vigorous biting edges, creating a soup of lateral and circumferential traction, with it’s more random blocks placements.

Note: Although, both tires have cut resistant rubber, they are missing with stone ejectors, which could have really helped them in gravel.

Both tire are not able to perform that well in mud, so you can’t expect to perform on par with MTs.

But the Falken Wildpeak is still a little bit better here.

The haphazard placement of blocks in the Kenda Klever AT2 provides an interlocking design which traps in the mud, so the tire gets packed very easily.

These tires also don’t feature proper lateral grooves, so mud can’t pass through the tire efficiently, and this dampens the tire’s cleaning abilities.

And with a blocky shoulder design, they are also not able to dig through in a better way, as well.

Falken Wildpeak on the other side, with it’s competitive shoulder design, where you see multiple variations forming saw tooth edges, shed more dirt and mud out of its way.

And as the tire forms more proper lateral channels combined with deeper tread, its able to pass out more volume of mud in comparison.

In terms of on road traction, you can’t go wrong with either of these tires, they are both almost equally as good.

But given the price point of Kenda Klever AT2 the tire really amazes you with it’s still worth mentioning off-road performance, durable construction, and 3PMSF rating.