Both are AT tires made to perform well, almost on all types of terrains. 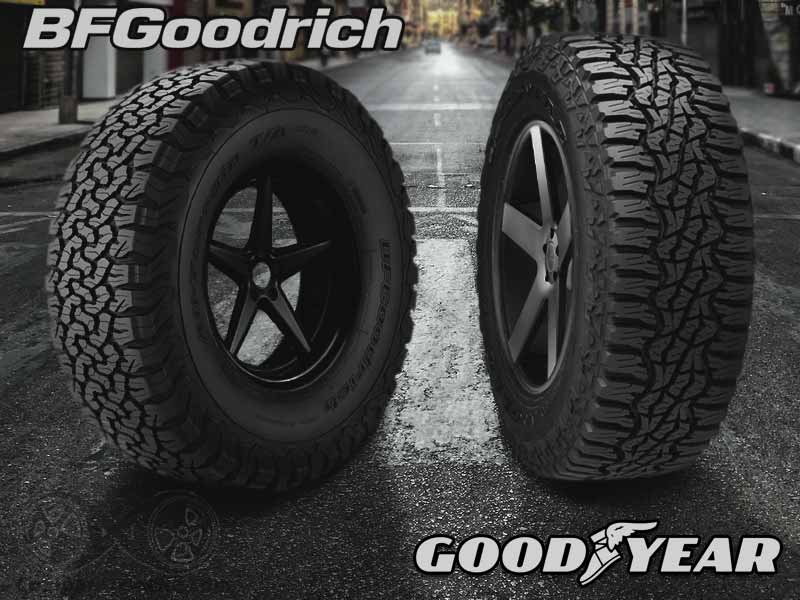 The Goodyear Ultraterrain AT due to its open tread design performs really well on mud and soft snow.

And the BFGoodrich KO2, having higher contact patch stays undefeated on roads.

Each tire has its own abilities, both are discussed in detail in this article. But before make sure you also compare other tires with KO2 as well.

The shoulder lugs of Goodyear Ultraterrain are comparatively open.

All the lugs are of almost similar shape. Each lug has two faces due to a broad cut in the front.

The central blocks have sharp edges and are divided by a channel of lateral grooves.

Central blocks have one sipe engraved on them while shoulder lugs have several.

The size of shoulder lugs is much bigger than other tread blocks.

BFG KO2 also has two faced shoulder lugs, they all are almost similarly shaped while half of them have a deep vertical cut engraved on them.

All the tread is divided by several lateral and longitudinal grooves.

Sipes are engraved all over the tread and the stone ejectors are also placed between shoulder lugs and the central part.

There is very small difference in the contact patch of both tires.

The void ratio of Ultraterrain is more due to its deeper tread plus slightly more wide grooves.

PS. Did you know, that the General Grabber ATX looks very similar to KO2?

The dry traction of KO2 is better than its rival this is due to its higher contact patch.

The more area of tread touching the ground from the central part increases the grip and the contact patch from shoulders helps to firmly grip the ground while cornering.

As KO2 excels in terms of contact patch, and it has comparatively more contact area from shoulders so its handling is even better than the grip, this improves the steering response and provides more confident driving experience.

Ultraterrain AT also grips well on dry roads due to its good contact patch but it can’t beat KO2 due to wider grooves.

Its handling is not much good on dry roads due to open spaces between shoulder lugs that decrease the contact patch of shoulders resulting in bad handling while cornering, it effects steering response of the vehicle.

The results of wet traction are also not much different from dry traction due to the difference in contact patch and number of sipes.

As KO2 has higher contact patch, it grips well on wet tracks plus it also has much more sipes than its rival, this further enhances its wet grip as sipes help to wipe the water away efficiently.

Sipes work side by side with grooves to wipe and throw the water away from the tread, making sure that tread stays in contact with the surface.

The handling of this tire is good as well due to sipes available in the shoulders that clear the water away while cornering.

Although it is good on wet surfaces but when it comes to flooded roads then this tire lacks behind its rival.

This is due to relatively lower void ratio; the narrower grooves allow low volume of water to pass from them and as a result its hydroplaning resistance is lower than the counterpart.

Ultraterrain AT performs well on wet tracks but it isn’t able to beat its counterpart.

This is again due to its decreased contact patch that isn’t able to grip well on wet surfaces.

Plus, it also has less sipes so its wiping ability is minimized as well.

Its handling ability is also limited due to open spaces in shoulders.

But it performs better than many other tires of its line due to wide and deep grooves that help to evacuate water.

Talking about hydroplaning resistance of this tire, it is the best among both due to wide grooves spread all over the tread that provide more space for the evacuation of water and allow the tread to maintain grip with the road.

The traction on mud depends upon the size of grooves, the wider the grooves higher will be grip and handling on mud.

As discussed before Ultraterrain has wider grooves so it will grip well on mud as the wide grooves have higher space to grab mud particles and throw them backwards clearing the path for the tire to move forward.

Its handling is also much better than KO2 due to deep and wide spaces between shoulder lugs that help to evacuate mud efficiently and provide confident steering response while cornering.

While KO2 has narrower grooves comparatively but still it performs well on mud as its interconnected grooves work well in channeling the mud out of the tread.

But as it has low void ratio so it can’t work as good as its rival and narrower grooves might get stuffed with mud and result in loss of grip if the tire is taken in deep mud.

The handling of this tire is better than its grip ability due to more wide grooves between shoulder lugs that help to evacuate more amount of mud particles, making sure that the tire moves smoothly without getting stuck.

But still the handling ability of this tire can’t beat its counterpart so in this section Ultraterrain is the clear winner.

To deal with soft snow a tire needs to have more biting edges and wider grooves.

Ultraterrain is the winner in terms of traction in soft snow due to its wide grooves that provide more evacuation ability and due to the deep tread, the biting ability of this tire is enhanced.

While cornering on soft snow the wide shoulder grooves help to evacuate snow efficiently and provide an uninterrupted handling experience.

On icy paths this tire lacks due to less contact patch and less sipes.

The less contact patch lacks the ability to grip well while due to less sipes this tire isn’t able to wipe water properly which can lead to skidding.

The handling of this tire is very poor on ice due to open spaces between the shoulder lugs that limit the shoulder contact with the surface.

The grooves throw the snow backwards while biting edges help to bite and maintain a firm grip with the surface.

Although it can’t beat its counterpart in the soft snow but from this, we cannot conclude that KO2 is not good on soft snow.

This tire performs really well on ice due to its higher contact patch and several sipes placed around the tread.

Both these features work together to increase the grip and handling on ice, putting this tire ahead than its rival.

Both these tires give each other a tough competition on rocks.

Ultraterrain AT crawls well on rocky surface due to its increased void ratio that helps the tire to bite by increasing the bite surface area.

Although it lacks stone ejectors in the shoulder lugs but there is no need of emitters over there due to wide grooves between lugs that do not provide enough space for the rock/stone particles to get stuck in between.

The central grooves also don’t have any prominent emitters but the bases of many tread blocks are extended in the grooves that work as ejectors, emitting anything from getting into the grooves.

So, this tire provides very good traction on rocks.

Though KO2 has relatively narrower grooves but it has numerous stone ejectors placed all over its tread. They work well in stopping particles from getting into the grooves.

Due to its smaller tread blocks it also has good biting ability and all these features combine together to make this tire’s traction good on rocks.

But due to low void ratio it can’t match the performance of its counterpart.

Is KO2 more Comfortable to drive on?

The on-road comfort of KO2 is higher due to low void ratio.

The low void ratio means less space for the movement of air particles so less noise will be produced.

While on the other hand its rival will produce more noise due to higher void ratio.

Ultraterrain AT provides more off-road comfort due to its high void ratio.

As it provides the feel of a lesser inflated tire, absorbing the effect of bumps while KO2 is also comfier but it can’t beat its challenger.

Ultraterrain due to open tread, will face less rolling resistance and tread wear will be lower as well plus it would stand as a more fuel-efficient tire comparatively.